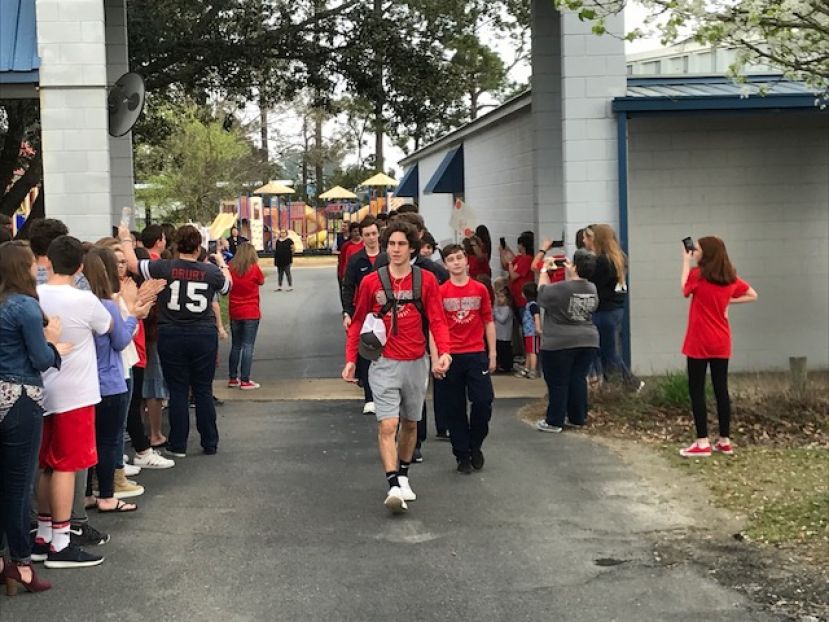 Robert Preston Jr./DouglasNow.com The CCA Patriots men's basketball team walks to the bus Thursday morning as they head up to Macon for their Final Four match-up against Crisp Academy.

Coffee County has been oh-so-close to bringing a state championship home this year. Of course, the Coffee Trojans football team played for a state title in December and came within inches of winning late in the fourth quarter. Then both Coffee men’s and women’s basketball teams advanced to the Elite Eight and were in position to advance to the Final Four. All three came up just a bit short.

But the quest for a state title isn’t over yet. This morning, the CCA Patriots departed for Mercer University in Macon for a Final Four match-up against Cordele’s Crisp Academy at 2:30 p.m. If the Patriots pull out today’s semi-final game, they will be one win away from a state championship.

CCA’s run through the playoffs has already been remarkable. They defeated Westwood in round one then tackled Solid Rock in the Elite Eight – the top-ranked team in the state that featured three players nearly seven feet tall. Beating Solid Rock was an accomplishment in and of itself; however, it’s merely a steppingstone to the ultimate goal.

It’s been a great year for local athletics. But there’s still work to do. And the CCA Patriots are more than capable of getting it done.