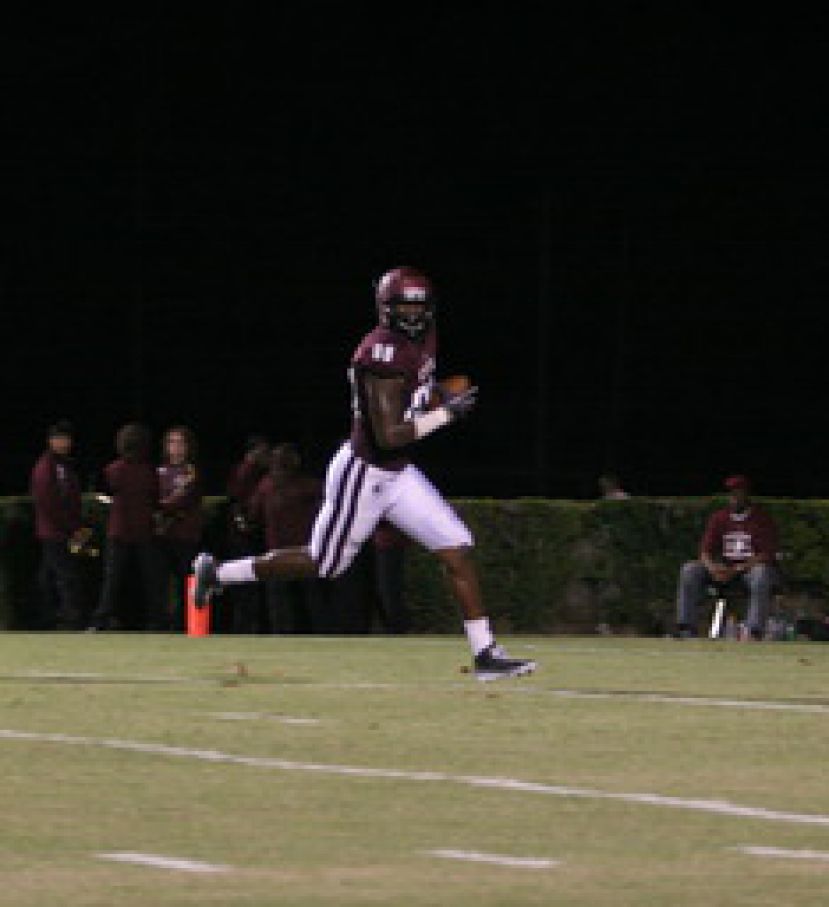 David Rodriguez/Special to DouglasNow.com Coffee defensive end Jalen Wilkerson crosses the goal line after returning a Savannah High fumble 16 yards for the eighth and final touchdown of the night for the Trojans.

“You like to have a game where everybody gets to play. Tonight was one of those games,” aid Coffee High head coach Robbie Pruitt. “Our starters played hard tonight and never let up on their intensity. We forced a few turnovers and I was particularly pleased with the way [back-up quarterback] Jeremiah Ashley played in the secondary. He came up and made several big hits. He may have found a new spot.”

The Trojans dominated the Blue Jackets from the opening kick. After forcing a Blue Jackets punt on the first drive of the game, Coffee launched a 63-yard drive capped by an 11-yard run by Davis. The point after was no good. From the rest of the first half, the wheels came off for Savannah. The Blue Jackets turned the ball over seven times and Coffee only had the ball in their own territory one more time in the first half. The Trojans took advantage of every Savannah turnover and got points out of each one. Wilkerson, who was playing defensive end, scored his touchdown on a fumble recovery that he ran 16 yards for a score at the end of the first half.

Coffee took a 54-0 lead into halftime but showed a little mercy in the final two quarters. Savannah came out and scored 21 unanswered points in the second half against a running clock to at least make the game somewhat respectable.

The game against Savannah ended the Trojans’ non-region schedule. Coffee has a bye week this week before facing the formidable Ware County Gators in two weeks in Waycross in a game that likely has region championship implications. The Gators defeated a very good Manatee (Florida) team 23-7 Friday night. “Now we’ve got to get ready for Ware. They beat a perennial state power tonight in Manatee. We’re going to get the film from that game and start breaking it down,” said Coach Pruitt.

More in this category: « Team Nocahoma takes first in Florida Two title belts up for grabs at Border Wars »