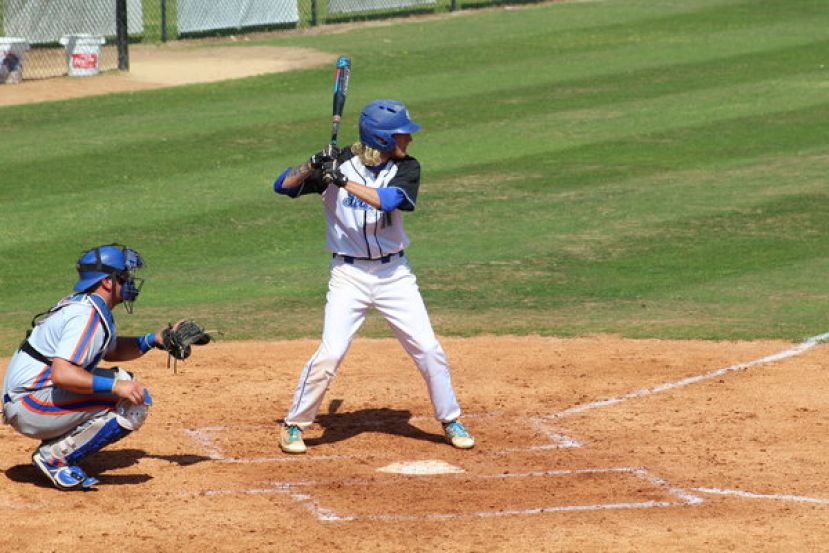 Submitted photo Cole Escher, a freshman from Green Cove Spring, Florida, gets a hit for the Hawks during the game at Crider Field.

The South Georgia State College Hawks earned four wins over Georgia Highlands in a week of baseball action to bring their overall record to 27-14 with a conference record of 13-6. This four-game winning streak has moved the Hawks into second place in the Georgia Collegiate Athletic Association (GCAA) ranking.

In game one of the series, the Hawks took on the Chargers Thursday, April 3, 2018, at Crider Field in Douglas. SGSC’s Mikell Collins had a busy day at the plate leading the Hawks with four hits to secure a 14-4 victory. Collins hit a grand slam in the first, singled in the third, homered in the fifth and doubled in the sixth. Adding to the counts for hits was Cole Escher, Tyler Salomon, Jacob Giles, Colby Owens, Jake Bryan, Blake Brito and Justin Brooks with one each. Caleb Moss was on the mound for the Hawks to open the game. He lasted three innings, allowing five hits and four runs. Cody Ogilvie got the win for SGSC. He allowed no hits and no runs over four innings, striking out six and walking none.

The Hawks traveled to Georgia Highlands at the end of the week to complete the series. In a doubleheader on Saturday, April 4, SGSC took two victories with scores of 4-1 in the first game and 15-1 in the final game of the day. The Hawks totaled eight hits in game one. Salomon and Owens managed two hits each, followed by Collins, Giles, Brooks and Garrison Hurd with one hit apiece. The defense stood strong by not committing a single error in the game. Mark Mixon carried the win for the Hawks on the mound. He surrendered one run on eight hits over six innings, striking out six and walking none. Hassan Westbrook threw one inning in relief out of the bullpen to record the last three outs.

In game two of the doubleheader, the Hawks scattered fourteen hits throughout the game to pile up fifteen runs. The offensive firepower was led by a home run by Hurd and RBIs by KC Brown, Hurd, Brooks, Owens, Escher, Giles, Salomon and Bryan. Brown, Owens, Giles, Salomon and Bryan each added doubles. The defense also contributed by not making a single error in the game. Zach Mainor was the winning pitcher. He allowed four hits and one run, striking out ten and walking none over his seven innings on the mound.

The winning streak continued on Sunday, April 8, as the Hawks made their way to an easy 11-3 victory. Owens and Brooks led the hit count with two. Spencer Speer, Salomon, Bryan and Hurd added one hit each. Austin Knowles took the win for the Hawks. He went eight innings, allowing three runs on six hits, striking out one and walking one. Landen Nevill threw one inning in relief out of the bullpen.