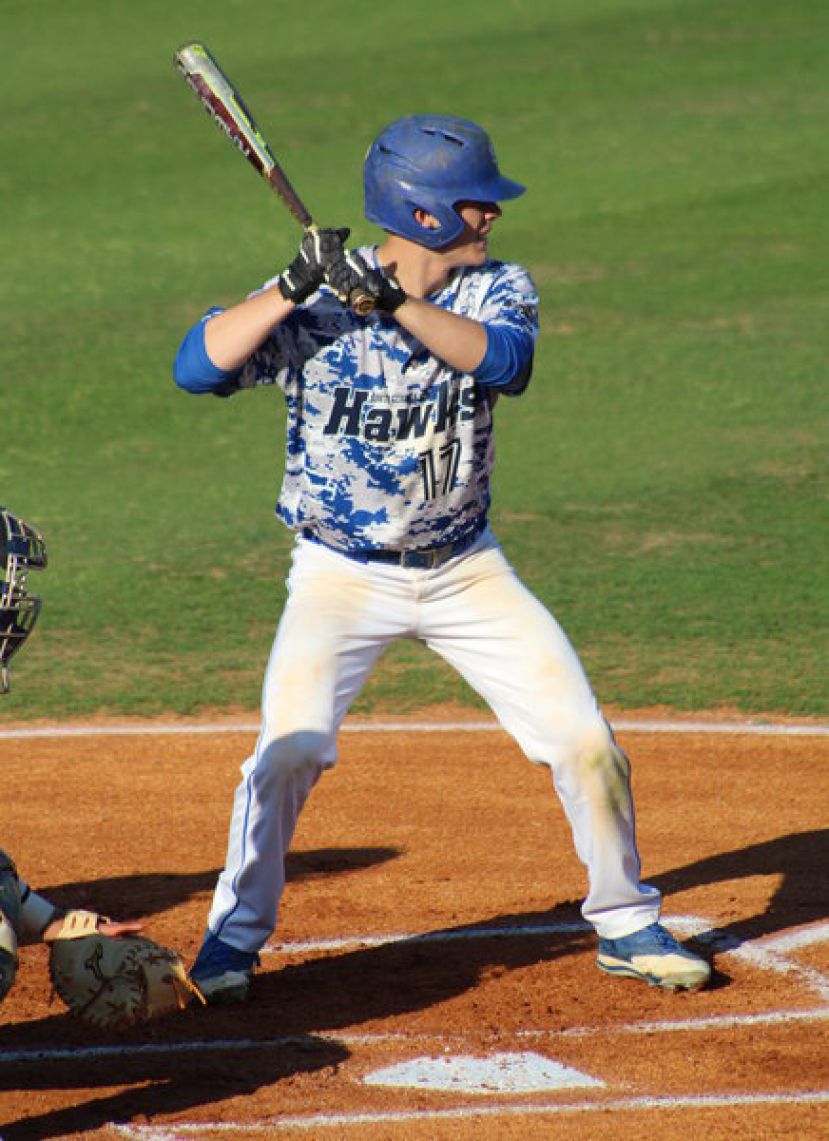 Submitted photo Jacob Giles from Bonaire, Ga., did his part in securing hits for the Hawks during the games against Andrew College.

The South Georgia State College (SGSC) Hawks baseball team continues to hold their second place position in the GCAA standings after a four-game sweep of Andrew College last week. They now stand at 31-14 overall and 17-6 in conference play.

The Hawks scored ten runs in the third inning on their way to a 12-5 victory over Andrew College on Tuesday, April 10th at Crider Field on the Douglas Campus. Caleb Moss started on the mound for SGSC and in three innings, he allowed only three hits while striking out one and walking none. Cody Ogilvie earned the win for the Hawks. He allowed one hit and one run over two innings, striking out two and walking one. Seth Shadix, Josh Mejia and Ian Smith all put in work on the pitcher’s mound in Tuesday’s game. Jacob Giles led with three hits on five at bats, followed by Tyler Salomon, Colby Owens, Mikell Collins and Justin Brooks with two hits each. Cole Escher, Ty Tyndal, Jake Bryan, Franco Perdomo, Cameron James and Garrison Hurd contributed one hit apiece.

SGSC took to the road to face Andrew College at their field in Cuthbert for the remainder of the series. In a high scoring game, the Hawks defeated Andrew by a score of 15-6 on Thursday, April 12. In the double-header on Saturday, SGSC came out ahead with a score of 3-2 in game one and 10-4 in game two.

In Thursday’s game, Mark Mixon was the winning pitcher, allowing no runs on five hits, striking out six and walking one. Logan Gurley, Ian Smith, Tyler Scarbary and Landen Nevill all took their turns on the mound, securing the outs and ultimately the victory. The Hawks racked up eighteen hits on the day with Escher leading with four hits. Owens got a homerun in the game while Escher and Bryan added doubles.

The first game of Saturday’s double header started a little slow with hits, but both teams were strong on the mound. Zach Mainor took the win. He surrendered two runs on four hits over five and two-thirds inning, striking out ten. Hassan Westbrook and Ogilvie entered the game out of the bullpen to help close out the win. Westbrook recorded the last three outs to earn the save. The Hawks totaled eight hits and got six stolen bases in the game.

In the final game of the series on Saturday, the Hawks grabbed an early lead and secured the victory thanks to six runs in the fourth inning. Salomon, Giles, Brown and Rodrejas Jenkins powered the big inning by contributing RBIs. Austin Knowles earned the win for the Hawks. He surrendered four runs on four hits over six and a third innings, striking out four. Caleb Moss threw two-thirds of an inning in relief out of the bullpen.