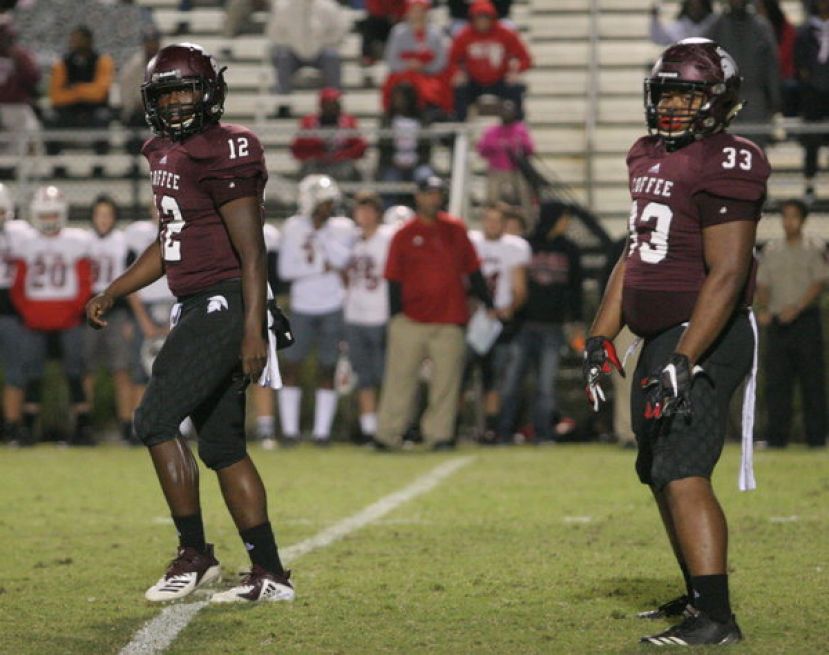 Robert Preston Jr./DouglasNow.com The duo of A.J. Wilkerson (12) and Josiah Killebrew (33), pictured above against Lee County, accounted for three of Coffee's six touchdowns in the Trojans' 45-17 win over the Stephenson Jaguars Friday night.

It’s not very often that a team loses the turnover battle and holds on to win the game. It’s even rarer for a team in that position to win big. But that’s exactly what happened to the Coffee Trojans Friday night against the #1-seeded Stephenson Jaguars. The Trojans, a #4 seed, turned the ball over four times to Stephenson’s three yet managed to win by four touchdowns, 45-17. Coffee is now 8-3 on the season and will stay close to home next week for the second round of the playoffs; the Trojans will travel to Richmond Hill next Friday night.

Once again, the Coffee running game proved to be the Trojans’ lifeline. Quarterback A.J. Wilkerson rushed for 135 yards and a score while freshman running back Maurice Turner ran for over 150 yards and a touchdown in the win. By contrast, Wilkerson only had 86 yards passing along with three interceptions, all of them in the first half. The Trojans also fumbled in the fourth quarter – inside the red zone at that – but still overcame those miscues to win the game.

Coffee took a 21-3 lead into halftime thanks to a pair of scores by running back Josiah Killebrew and another touchdown by Maurice Turner.

In the second half, the Trojans picked up touchdowns from Wilkerson, Jabez Turner, and Tim Landers. Landers’s touchdown was a pick six – the third interception of the night for Coffee. (Malachi Williams and Brian Colbert also picked off Stephenson passes in the game.) Tony Rivas added a 37-yard field goal of his own. He was also perfect on extra points Friday.

After the game, head coach Robby Pruitt said he was pleased with the way his team played. “We came out of the gate a lot faster tonight. That’s one thing I challenged them with all week long. In the playoffs, you’ve got to get off to a fast start. And they did that – the came out strong early. Our defense played really hard. This was a good win for us. Our region is so tough. Iron sharpens iron and our region prepared us for this,” he said.