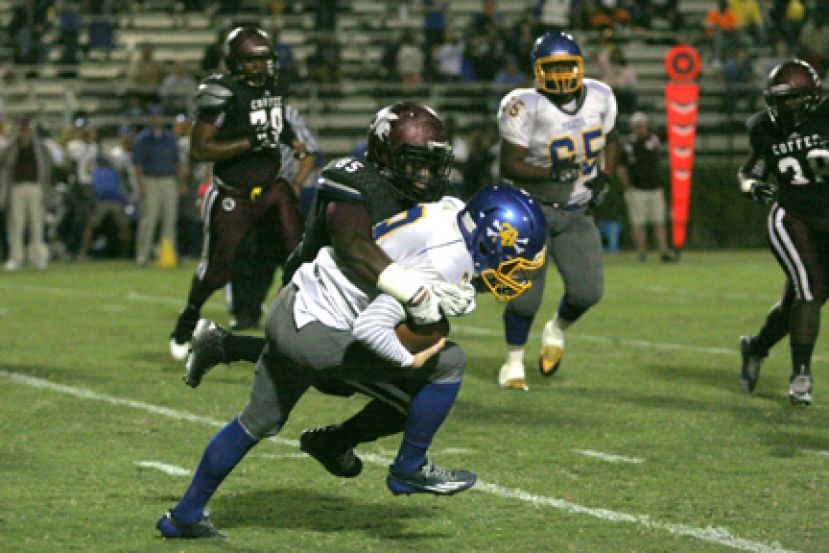 Robert Preston Jr./Douglasnow.com After struggling early in the game, the Coffee Trojans' defense stepped up the last three quarters and played a fantastic game. Here, Coffee's Cam Davis stops Brunswick quarterback Randon Jernigan in the first half Friday night. Davis and Jalen Wilkerson finished the game with one sack each. Wilkerson and linebacker Jay Lott both recovered Pirate fumbles and Lott ran a pick-six back 40 yards in the fourth quarter.

It took a little while tonight but the Coffee Trojans finally figured out the Brunswick Pirates’ spread offense. Along the way, the Trojans defeated the Pirates 35-20 in a scoring barrage that included touchdowns on offense, defense, and special teams. By beating Brunswick, Coffee clinched home field advantage for the playoffs and still has a chance to win the region should the Pirates upset the Ware County Gators in a few weeks.

The first quarter was all Brunswick. The Pirates’ John Grant scored on their first possession to give Brunswick a 7-0 lead. Coffee ended up punting on its next possession but the Pirates coughed up the ball. Defensive end Jalen Wilkerson recovered the fumble at the Coffee 46. The Trojans then made the most out of the opportunity, scoring a few minutes later on a 29-yard run by Lecarvius Sears. Austin Lord’s foot was true all night long and the game was knotted at seven apiece just five seconds in the second quarter.

Coffee and Brunswick combined for five straight punts after Sears’s touchdown. Then, with under 30 seconds left in the first half, the Trojans’ Demetrius Davis broke a 49-yard run for a score, and Coffee took a 14-7 lead into the half.

In the locker room, head coach Robby Pruitt and his staff tweaked their defensive game plan to better control the Pirates’ spread offense. To keep things close and give themselves a chance to win, the Trojan defense had to step it up over the last 24 minutes. “It’s tough to defend,” said Coach Pruitt at halftime of Brunswick’s offense. They’re spreading us out and we’re not tackling. We’ve got to move the ball and make some plays. We’ve got to do the little things.”

His team was listening and in the second half, the Trojans broke the game wide open. On their opening drive of the third quarter, a long pass from quarterback Tyree Paulk to Wilkerson, who was playing tight end on offense, set up a five-yard touchdown run by Davis, his second of the night. With 8:23 left in the third quarter, Coffee had a 21-7 lead. At the beginning of the fourth quarter, a trick play gave the Pirates another score. The point-after was no good but Brunswick had narrowed the gap eight points – 21-13.

On the ensuing kick, return specialist Anthony Fussell took the Pirates’ kick 90 yards for a touchdown. Coffee added another score when linebacker Jay Lott intercepted a Randon Jernigan pass and returned it 40 yards for a score. The miscue gave Coffee a 35-13 lead with 4:27 left in the game. Nineteen seconds later, Jernigan broke loose for a 72-yard touchdown run of his own. With 4:08 remaining, Coffee was leading 35-20. Neither team would score over the final four minutes.

“We did a good job coming out in the second half. We encouraged the players to settle down and just play. They were in the right places but they weren’t making plays. We challenged them; we told them someone had to make a play for us. Anthony Fussell stepped up and gave us that spark,” said Coach Pruit after the game. “We need confidence. We need to expect to win, to expect to make stops on third and long. We’re not there yet but tonight took us one step closer.”

The Trojans are off next Friday. They return to action on Oct. 31 when they travel to play Richmond Hill. On Nov. 7, Coffee closes out the regular season against Bradwell Institute at home. The Trojans are now 7-1 overall and 5-1 in region play.