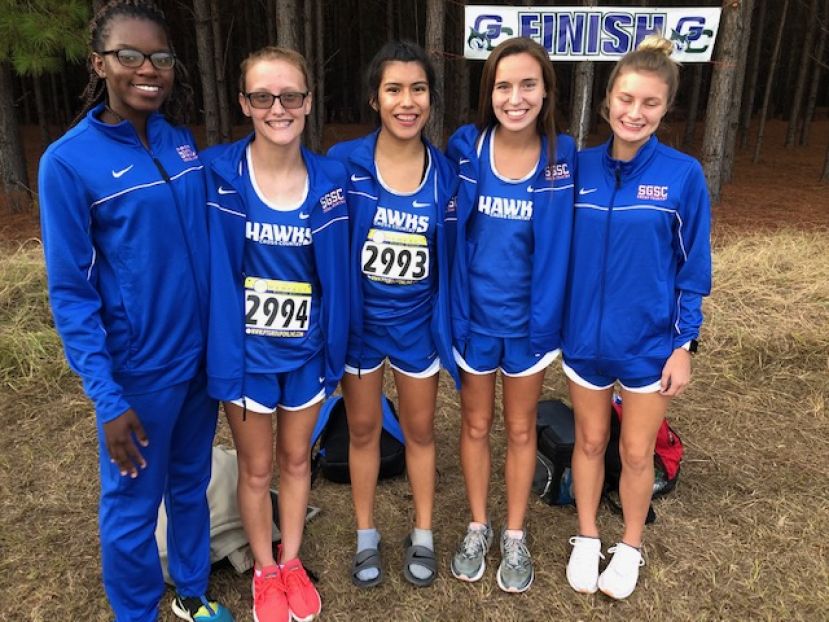 Three points. That’s how close the South Georgia State College cross country team came from winning the GCAA region championship Wednesday afternoon in Milledgeville. Three Hawks placed in the top 10 and one, sophomore Shanya Washington (Ware County), finished third overall with a 22:15 and a spot on the All Region team.

Georgia Military College finished in first place with 36 points while SGSC came in next with 39. In a cruel twist, SGSC’s average team time was nine seconds faster than Georgia Military’s time.

The Hawks knew they were in a good position heading into the final meet. SGSC’s last two meets, at Clayton State University in Atlanta and Georgia Southern University in Statesboro, saw strong performances from all five team members. In Statesboro in particular, the Hawks bested one four year school and came within two points of beating a second for second place.

“We started out the season very slowly – in both a literal and figurative sense. It took a month or so for us to find our form. We had the luxury of racing a number of meets and we were able to race ourselves into shape. The girls peaked at the right time,” said Robert Preston Jr., SGSC’s cross country coach.

Washington finished with a 22:15 – just a few seconds from qualifying for SGSC’s all-time record book and over a minute ahead of Lillith Broaddus of Central Georgia Technical College. Kalli Wilkes (Jeff Davis) finished in sixth with a 23:55. Lileni Morales (Coffee) posted a 24:21, good for ninth place. Brooke Reese (Wayne County) came in 15th and Kaitlyn Thigpen (Atkinson County) made the top 20 with a 19th place finish. The Hawks posted an average time of 24:58, far and away their fastest average of the season.

“It’s hard to put into words exactly how much this team accomplished this season. In July, we only had three runners. When school started, we had four. Just having a full squad of five runners was a tremendous accomplishment. To take the minimum of five runners to the region championship and come so close to winning is incredible. These five girls deserve all the credit in the world. They worked, sacrificed, and never gave up. At the beginning of the season, we were firmly in last place in the region and I wasn’t sure we’d be able to get out of the cellar. This meet was important for these girls and the SGSC cross country program. We’re going to build on this year’s success and accomplish even more moving forward,” stated Coach Preston.

Three runners – Wilkes, Morales, and Thigpen – return next season. Both sophomores -- Washington and Reese -- have opportunities to run for four year schools in 2020.