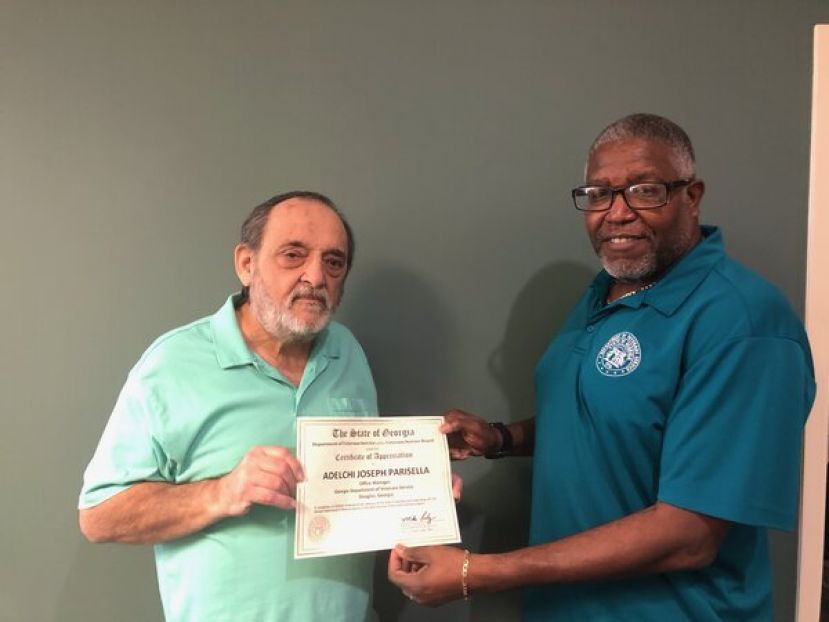 Submitted photo Del Parisella (Ieft) accepts a certificate of appreciation as he retires from the Georgia Department of Veterans Services.

Del Parisella, a representative with the Georgia Department of Veterans Services, retired last month after over 45 years of public service.

Del served in the U.S Air Force for nearly 25 years, retiring after a career that spanned 24 years, 10 months. From there, he worked almost 12 years with the state then began a career with the Georgia Department of Veterans Services that lasted over nine years. Del believed that there were few callings more important than taking care of veterans. He began as a veterans representative in the McRae field office, eventually transferring to the Douglas office in 2014.

Upon his retirement, he was presented a proclamation recognizing his years of dedicated service. The proclamation states “we keenly realize the loss we will sustain in no longer being able to enjoy Del’s valued services and wise counsel, as well as the delightful personal association which we have prized throughout the years he has labored in this special field of service, his wealth of knowledge, and his compassion for the veterans have earned him a permanent place in the hearts of his coworkers and friends, and have earned him a special place in his community.”

Del was also named honorary office manager of the Douglas office of the Georgia Department of Veterans Services.

Thank you, Del, for your service to your country, the citizens of the state of Georgia and Coffee County, and the veterans who have given so much for the freedoms of this great nation.

More in this category: « 4-H Shotgun team competes in Savannah Doggett and Thomas named Wiregrass employees of the year »
Login to post comments