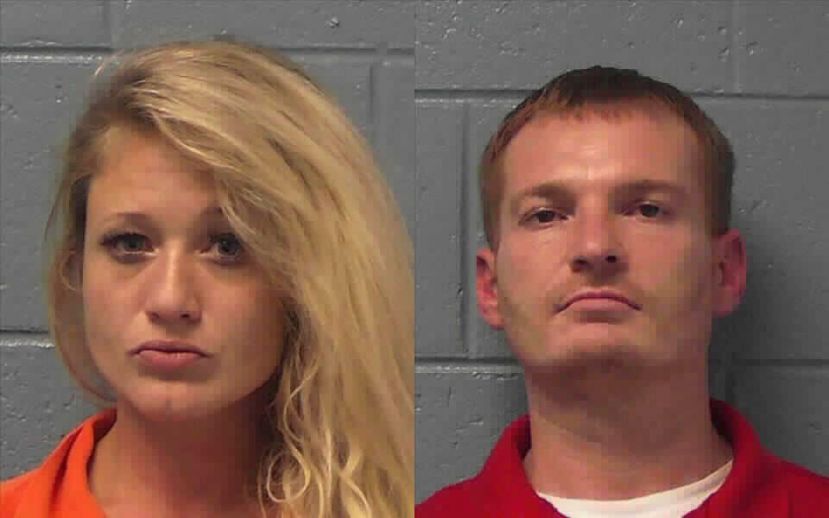 Following a lengthy narcotics investigation into Jonathan Alvin Pope, 36, of the 1600 block of Gilmore Street and his illegal activities, a combined team of law enforcement officers arrested him as well as Ashlee Nichole Pope, 30, of the 5700 block of Central Avenue following a traffic stop in Millwood Wednesday night.

Lawmen arrested the Popes Wednesday night at about 9:30 PM on U.S. Highway 82 in Millwood within Ware County.  The vehicle driven by Ashlee Pope was stopped by troopers with the Georgia State Patrol (Waycross Post), and Jonathan Pope, who was a passenger in the car, was initially taken into custody on an outstanding sale of methamphetamine warrant previously obtained following an investigation by the Ware County Sheriff’s Office, Brantley County Sheriff’s Office, and the ATF. Jonathan Pope also had a State of Georgia parole warrant.

The multiple-agency investigative team then arrived at the stop location, and a Ware County Sheriff’s Office K-9 alerted on the vehicle.  A thorough search of the car was done by investigators, and about 3.8 pounds of suspected methamphetamine was found within a backpack in the car by Det. Sgt. Robert Weiss.  Jonathan Pope was then also charged with trafficking in methamphetamine.  The driver of the vehicle, Ashlee Pope, was likewise taken into custody and charged with trafficking in methamphetamine.

Ashlee Pope was then formally charged with trafficking in methamphetamine, conspiracy to commit a felony, possession of a Schedule III controlled substance (buprenophine hydrochloride), and drugs to be kept in their original container.  The pair’s bond was denied at their first appearance hearing before Ware County Magistrate Ray Hampton, and they remain in the Ware County Jail.

“I genuinely can’t convey my gratitude to all the agencies involved to allow one of the largest methamphetamine seizures in recent memory within Ware County.  The Coffee County Sheriff’s Office, Brantley County Sheriff’s Office, Georgia State Patrol, Waycross Police Department, the ATF, and my own Deputies came together as one to allow for almost four pounds of methamphetamine to be taken out of circulation on our streets.  I have the utmost respect for all agencies that participated in this investigation.  Today was one of the good days.  I have recently said that this, again, illustrates just how much can be accomplished by all of us in the law enforcement community when we all work together to get high-level offenders off the street and into the jail,” stated Ware County Sheriff Randy Royal.